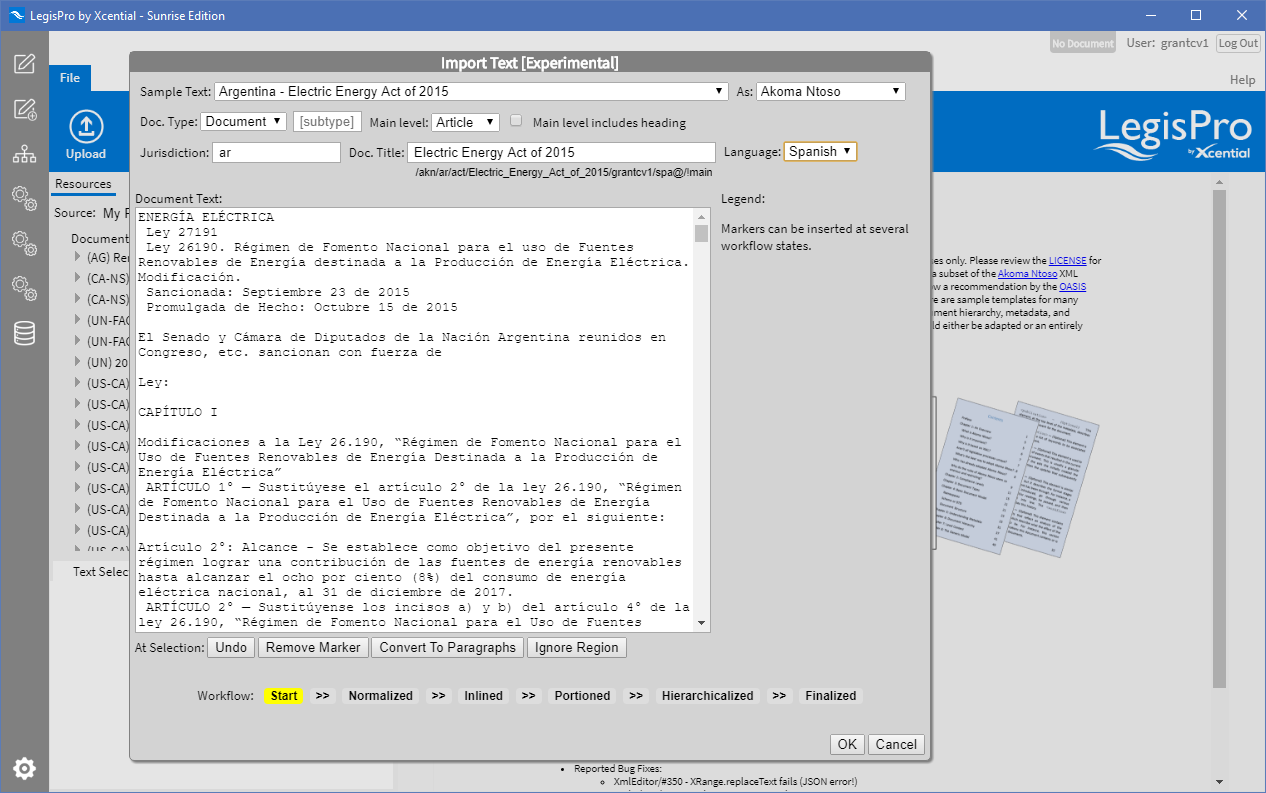 Perhaps you have noticed that my blogging has been rather sparse of late. There is a reason for that – I’ve been totally occupied with the development of LegisPro. It’s come a long way in the past year. So what’s new?

Track changes is a powerful capability – change sets make it more so. With change sets it is now possible to organize changes into sets of changes and the relate metadata to each set. A change set can record the provenance of a change, the effectivity or date the change is to be applied, conditions that make the change operational, and many other pieces of information necessary to manage the change. Also, change sets can nest. We’re using change sets to implement point-in-time law and codification projects,

Document conversion is one of the biggest stumbling blocks when it comes to adopting XML. I’ve worked on numerous legislative projects around the world. While it is commonplace to describe the variations among the jurisdictions as making common systems impossible, I’ve come to realize the variations are not random, are not unmanageable, and shouldn’t be an impediment. In fact, the more you understand the history of legislation, the more you starting seeing recurring patterns that can be exploited. One such way to exploit the patterns found in legislation is to build an ad hoc document converter. It is by no means a perfect converter, but it’s a great starting point for conversion. It works by reading the text to find language patterns – in English, French, Spanish, and any other language which can be analyzed.

While the era of paper is drawing to a close, we’re not done with the document just yet. There is still a need to produce a readable document. We’re building support for multi-channel publishing – HTML, PDF, XML, plain text, and the like. Most recently, we’ve been focusing on producing PDF documents from Akoma Ntoso.

It’s no secret that LegisPro has recently adopted the Electron framework to produce a desktop platform using web-based technologies. As a desktop tool, LegisPro enjoys all the benefits one expects on the desktop. But, we haven’t neglected the browser use case. LegisPro can also run as an application server. In this mode of operation, LegisPro is web service that runs on a server and can be accessed from the browser.

We have traditionally supported Windows-based desktops. However, there is no inherent platform limitation with our technology stack. After recent testing, we can now claim to support Windows, Linux, and MacOS. What’s more, we can serve all three of those platforms on both the client (browser and desktop modes) and the server side (application server).

There have been a number of refinements to the architecture of LegisPro. One I am particularly excited about is a change to how the resolver works. The resolver is a web-service that manages all URLs – from loading the application to managing references. The change is to support a new asynch/await feature recently added to JavaScript. With the new architecture, which I call asynchronous recursion, the performance of the resolver has been improved considerably. This is because retrieving files no longer block other files from being retrieved. By slicing requests up into smaller chunks, the resolver is able to more efficiently respond to each and every request. (This change also allowed a nasty bit of C++ code to be removed from the system)

Akoma Ntoso a a large expansive standard. It’s impossible to support everything that it enables. However, as time goes by, we’re able to chip away at what is possible. Most recently we extended support to statements (which might map into resolutions in your jurisdiction) and ad hoc documents. Also, support for tagging using taxonomies has increased substantially.

So, as you can see, we’ve been busy. LegisPro is now in the hands of a growing number of jurisdictions and we’re opening our repositories to partners and customers to allow them to start taking advantage of the many things that are possible with our platform.

Hopefully, I will now start finding more time to work on my blog.